Though a close relative of Kentucky bluegrass, poa annua is a common grassy weed with an annual life cycle. Although this plant usually dies off with the hot summer weather, Poa annua seeds are quite resilient and can remain dormant in the soil for years, making Poa annua control extremely difficult. To kill this annual bluegrass, you may need to take a combination of Poa annua control measures that we’ll outline here.

What Is Poa Annua?

Poa annua is an annual bluegrass that is widely disdained by lawn growers because of its unattractive yellowish-green appearance, weedy seed heads that tend to persist even with mowing short, and annual life cycle that leaves lawns looking patchy by late summer or early fall. Poa annua plants are cool-season grasses that can grow in poor conditions like compact soil. Unlike most lawn grasses, Poa annua annual bluegrass has a shallow root system and is a prolific seeder. Poa annua germinates in the early fall. It will grow happily along roadways, on golf courses, and even in the center of your lawn.

Poa annua annual bluegrass is light green in color with a slightly yellowish tint. Because of its lighter hue, it often stands out from other grass types. Poa annua annual bluegrass produces a tall tasseled seed stalk, one of its telltale identifying markers. Poa annua grass will produce this seed stalk even when mowed short, so it’s tough to control Poa annua with cultural methods. Since Poa annua grass plants die off with the heat of early summer, it will leave the lawn looking bare and patchy.

Beginning in late summer or early fall, Poa annua seeds will begin to germinate. Poa annua germination can occur through early fall. Its seedlings will continue to grow through the fall and flower by early spring. This grassy weed can usually be spotted in winter in clumps; it will stop growing during the coldest part of winter but doesn’t die. It will grow rapidly in spring along with many other grassy and broadleaf weeds.

It can be difficult to determine the difference between the two types of grass without a close examination. Poa annua annual bluegrass typically produces an appendage (ligule) at its leaf base. The appendage looks like a small piece of clear tape. Kentucky bluegrass does not produce this membrane or, when it does, it is very short. Many people don’t realize they have a Poa annua weed problem until the late summer when their lawn begins to look yellow and patchy, where the Poa annua grass has died.

How to Control Poa Annua

If you have annual bluegrass growing in your lawn, you’ll want to control even small patches. Otherwise, the patches will grow larger and larger during subsequent growing seasons. It is challenging to control Poa annua because of its hardy seeds that can lay dormant in the soil for years. Herbicides do not typically harm Poa annua seeds, which makes complete eradication of annual bluegrass in a single season nearly impossible. You can also mow your grass higher, which can deter annual bluegrass from thriving. This may seem counterintuitive, but mowing this short-growing annual bluegrass short doesn’t seem to phase it. However, allowing your existing lawn to grow taller has a way of smothering out the Poa annua.

How to Kill Poa Annua

How to Prevent Poa Annua

Tenacity is an off-label Poa annua control measure. It will kill Poa annua weed without harming your existing lawn, but it isn’t labeled for killing Poa annua.

Is Poa annua hard to kill?

Poa annua is difficult to kill because its weed seeds are so hardy. Annual bluegrass seeds can lay dormant in the soil for years. Poa annua drops many seeds, which is why it’s such a prolific weed. Use a pre-emergent herbicide to prevent annual bluegrass seeds from growing into seedlings.

What herbicide will kill Poa annua?

Herbicides that contain atrazine will selectively kill Poa annua. Tenacity herbicide can also kill Poa annua. If you have a few annual bluegrass plants, you can use nonselective herbicides to spot treat, especially if you notice the plant growing in sidewalk cracks or near your driveway.

Should you pull Poa annua?

A Poa annua plant has shallow roots, so it’s easy to pull. The plant is an annual weed that won’t spread via its roots. However, pulling the plant will be ineffective if it has already dropped its seed. It’s best to pull Poe annua before it develops its seed stalks.

How do you kill Poa annua in your yard?

When does Poa Annua germinate?

Poa annua germinates in the late summer and early fall when soil temperatures start to fall below 70 degrees.

How do I get rid of Poa Annua?

Since it’s a winter annual grass, the best way to control Poa annua is to apply a pre-emergent to your lawn in late summer or early fall, and again the following spring. This will help prevent the invasive weed from germinating.
To get rid of and control Poa annua once it’s already established in your lawn, a non-selective herbicide like glyphosate will do the trick. Tenacity Herbicide will damage P. annua, although this isn’t listed on the label of weed grasses it’ll kill.

What’s the difference between Poa Annua and Kentucky Bluegrass?

Poa annua and Kentucky bluegrass look very similar when the grasses begin to flower and seed. But while P. annua is an annual cool season plant, KBG a perennial. The seeds that shed from P. annua germinate in late summer or early fall, where the KBG seeds are sterile and do not germinate. And while Poa annua appears as a lighter shade of green, KBG is known for its deep, dark green that sometimes appears blue.

What is another name for Poa Annua?

What’s the difference between Pao Annua and Poa Trivialis?

There’s a lot in common between Poa annua (annual bluegrass) and Poa trivialis (rough bluegrass). Both plants exhibit clumping growth and a lighter shade of green, but the main difference between the two weeds is that P. annua is an annual grass, while Poa triv is perennial.

Poa annua also flowers and produces seeds in late summer, whereas Poa triv generally does not. P. annua germinates in the early fall — usually in September — and survives overwinter in a vegetative state, only to emerge and thrive in your lawn the following early spring.

Both of these grasses require cultural and chemical weed control practices to manage.

The label of Tenacity reads that both bentgrass and Poa annua are “sensitive to Tenacity applications.” We tried two applications of Tenacity with a non-ionic surfactant on P. annua and saw the weed turn white, then brown, and ultimately die. But this isn’t a guarantee that it’ll kill P. annua or similar weed species or prevent its weed seeds from shedding and germinating.

Does Tenacity work as a Pre-emergent against Poa Annua (Annual Bluegrass)?

The label of Tenacity reads that when used as a pre-emergent against weed species like Poa annua, it acts as a suppressant. It’s always best to use Prodiamine on your lawn in the late summer, and again the following spring to help prevent the germination of P. annua. But using Tenacity (Mesotrione) at seeding is a good measure to help control Poa annua. 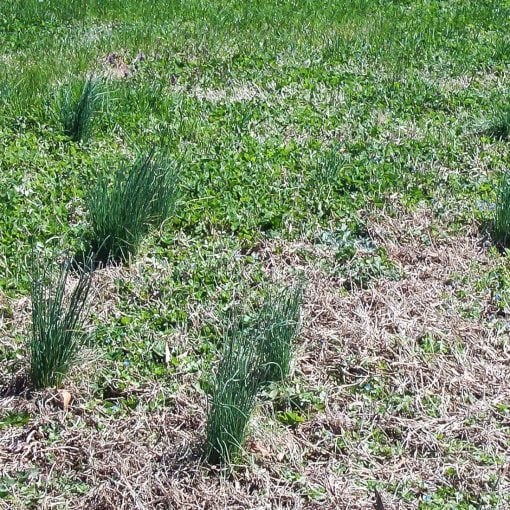 Tenacity Herbicide is a unique herbicide. Not only can it kill over 40 weeds, including crabgrass and creeping bentgrass, but it also […] Of all the pest species that frequent our backyards, adult mosquitoes may be the worst of all. Capable of biting humans and […]